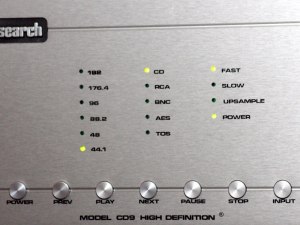 Audio Research introduced their new Reference CD9 CD-DAC at CES 2013 and reports just after as following:

The Reference CD8 has been extremely popular, winning acclaim and awards internationally for its stellar performance since being introduced in November 2008. Anengaging musical performance has kept its sales surprisingly strong, even in the face of new digital technologies. The fact is that lots of music lovers still embrace their compact disc collections and will not give them up.

After four years it is finally time to replace the REF CD8. People still want to play their CDs, but they also want to add other digital sources such as computer audio to their music systems, so we are introducing the REF CD9 CD-DAC. It combines the best of both, a super high-resolution compact disc player with a super high-resolution digital-to-analog converter that is stunning in its musicality. The retail price is € 14.500,-.

Benefitting from what we have learned in the development of the REF DAC and the DSPre, the REF CD9 utilizes quad 24-bit DACs running in mono mode, with dual master oscillators; one for 44.1/88.2/176.4 sample rates, the other for 48/96/192kHz sample rates. Sample rate conversion is selectable for all inputs, allowing playback in native resolution or via upsampling, including compact disc and—for the first time—the USB input. Additionally, there is a selectable digital filter, with either fast or slow rolloff.

On the bench, the bandwidth of the REF CD9 is five times that of the CD8, with one tenth of the distortion, greater dynamic range, and it is also quieter.

Like the REF5SE, REF PH2SE and REF DAC, the analog section is vacuum-tube, with four 6H30 dual-triodes, and there is vacuum-tube power-supply regulation featuring a 6550WE with a 6H30. The magic is continued.

The front panel has the familiar, dimmable CD display on the left side. On the right side there are three vertical LED displays indicating Sample rates (44.1-48-88.2-96-176.4-192 top to bottom), Input (CD-RCA-USB-AES-TOS top to bottom), and Fast-Slow-Upsample-Power (top to bottom). Underneath the LED displays there are seven silver metal buttons for Power, Previous, Play, Next, Pause, Stop, and Input.

Silver handles are standard with a natural front panel. Like its predecessor, the chassis and top cover are black, and the footprint remains the same. In addition to the digital inputs, the back panel includes Digital Outputs (AES/EBU and BNC), single-ended RCA and balanced XLR outputs, and a 15A IEC power connector. It comes with our new, metal remote.

Because it is functioning as separate DAC, our custom ASIO drivers must be installed in your computer for use with the USB 2.0HS input. 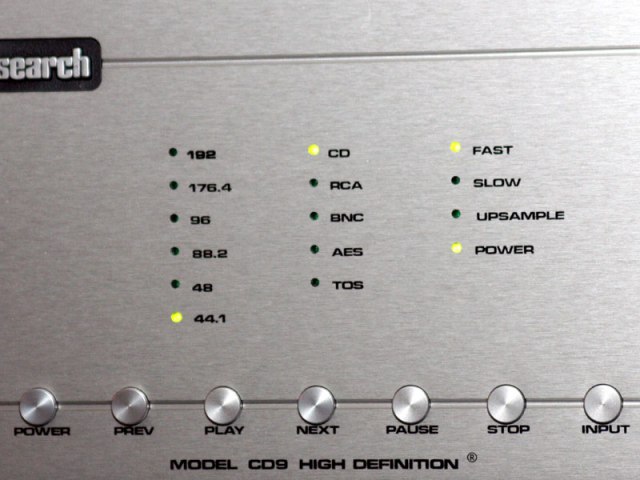 Sonically, the REF CD9 is in a new class, combining the magical musicality of tubes with new levels of transparency and aliveness. The REF CD9 sounds “faster” with greater transient speed, improved dynamics from top to bottom, much greater resolution of inner detail, with a focus and purity that is captivating. Rhythm, pace and timing are better than ever, something you must hear to appreciate.