Italy is known, amongst other things, for its staggering number of high-performance car manufacturers. Ferrari, Lamborghini,Bugatti, all have their roots in the country and all have gone on to become giants of the industry. One of the newest, though no less acclaimed, of the Italian elite marques is Pagani.

Founded in 1991 in Modena, the crucible from which the most illustrious manufacturers can claim their heritage, Pagani have consistently made a mark on the industry with their high-performance automobiles. Using advanced composite materials and engineering techniques they have created some of the world’s fastest supercars with the Pagani Zonda and the phenomenal Huayra.

Throughout its short history, Pagani has been praised repeatedly by automotive, lifestyle and luxury media all over the world. Numerous awards and records justify their renown, with the Zonda claiming the first EVO car of the year award in 2001. It is now a car much sought-after by collectors and automobile aficionados alike, who appreciate the flawless balance of design and performance inherent in the Zonda. The new Pagani Huayra was launched in 2011 yet has already earned its own iconic status, having won the three most prestigious European Car of the Year awards in 2012 and becoming the fastest car ever round the Top Gear test track. At this year’s Geneva Auto Show, it was this car that was picked to be the host of a new and extraordinary collaboration….”

If you want to read the complete review, click on the picture hereunder. 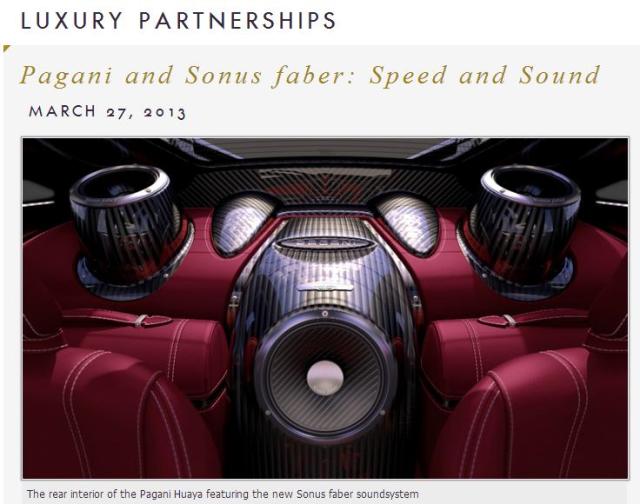 LUX Worldwide is the world’s largest online luxury resource.  We have selected the best and provide information and comment about more than 2,000 leading luxury companies.