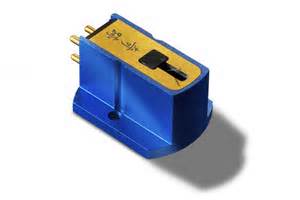 Kiseki has already won the contest for the most sensational, most beautiful packaging. What you get is a solid round wooden praline. Access only possible with concentrated force. You do really need a screwdriver here. After a short tea ceremony, there is the gem, open and exposing: in a demonstrative blue color. The Mystery called Kiseki Blue NS.

Herman van den Dungen, the man behind the company in the Netherlands, originally wanted only to bring the Blue NOS Series. In the sense of “New Old Stock”: the last remaining material from the 80s was used to create new cartridges. Only one hundred copies came from the hands of the master. The disappointment of the fans who could not get hold of a NOS cartridge was great. Van den Dungen relented and came up with the Blue NS version. NS stands for “New Style”.

The differences are not only visible for connoisseurs : The NS version is shorter than the original model. Which is an advantage – for mounting in modern tone arms with rather limited space. Van den Dungen has all other construction principles maintained. “But all parts are of today’s production”, he assures us. So no supply problems in case of increased demand. We don’t hide our exuberance – here we are overwhelmed by a perfect, vibrant vinyl sound. This silenced any discussion about warmer, softer, louder; after a brief run in period, we already were living here in a perfect balance between enthusiastic moments of pleasure and a very smart analog naturalness.

A wonderfull open and vibrant vinyl analyst. Half an LP side is sufficient, and Kiseki has played itself into the I-want-to-have -heart. Friendly-charming, even with critical vinyl quality.

As reported in Stereoplay April 2014 by Andreas Günther

NOTE: The magazine/reviewer thought the Kiseki Blue NS was retailing for € 3,000.-. Only after having gone in print they found it was just under € 2,000.-. So next issue they probably will change the rating to an even higher level

More information about Kiseki you find at www.kiseki-eu.com or www.durob.nl