A look inside the PrimaLuna DiaLogue Premium integrated amplifier ($3199) reveals neat point-to-point wiring and high-quality parts, like Takman resistors and SRC tinfoil capacitors—stuff that an amp-lover like Art Dudley might appreciate.

CES, The Consumer Electronics Show, the granddaddy of all shows. I’ve been attending CES events since the mid 1980s, and never seem to get tired of them. There are so many exhibitors, spread out over several locations, that it is simply impossible to even contemplate seeing everything. Even just trying to stop in all the High Performance Audio exhibits (as CES refers to high end audio) to get a few photos leaves little time to actually listen to any of them for more than a minute or two. Add in all the exhibitors down the street at The Home Entertainment Show, and you realize how important it becomes to find a focus, something to direct you to those displays, rooms and suites that you can pay a little extra attention to, while justifying skipping over some others.

Since PFO had several writers representing them at the show, I decided to focus once again, like I usually do, on the more affordable offerings on display, while leaving the megabuck systems to others on the staff. That doesn’t mean I avoided more expensive gear altogether, but I did try to spend the extra time as necessary with the less expensive. Admittedly, the concept of “affordable” gets skewed in an environment like CES, and after several displays of products costing $50,000 or more, somehow a speaker for $15,000 or a $9000 amplifier starts to sound reasonable.

I usually don’t offer up any best of show comments simply because I understand the difficulty of setting up a system in this environment. If a room sounds exceptionally good, I know the gear in it must be good, but if a room sounds mediocre, I’ll write it off to setup, environment or the standard “show conditions” excuse.

I spent most of the first two days of the show covering the audio displays at the Venetian Hotel, and then spent the remainder of the second day and the whole third day at The Home Entertainment Showat the Flamingo. On the last day I went to the main convention center and to the Photo Marketing Association pavilion in the Venetian. I spent 30 years in the photo industry, and had to see what was left of that once great market.

Also, I always look to shows like CES to find proof that manufacturers are on the cutting edge, ready to move the market forward and ensure their future. I watched the photo industry fail at this over many years, and at this CES I was really looking to see how the audio industry was preparing for the future of networked audio and server based audio. To that end, I only brought a USB flash drive with Apple Lossless files or 24/96 WAV files on it. I did go expecting every display to be able to handle playing this files. Silly me…

If I left anyone out of this report, it most likely was just that I didn’t get to your room, no offense intended. It most likely was that their gear was out of my price range and therefore not part of my focus. However, there were some rooms that I avoided for a few other reasons:

So, let’s start with what I saw displayed at CES at the Venetian, that seemed reasonably priced and sounded promising, at least. In somewhat alphabetical order, here we go! 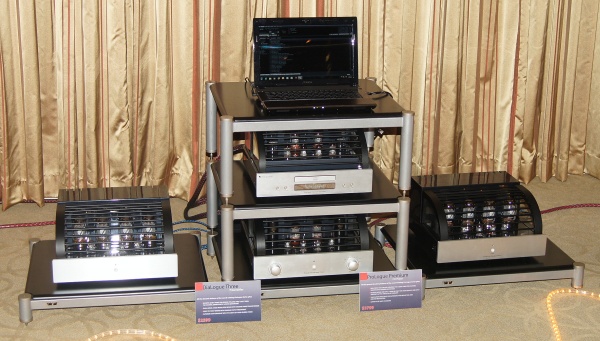 PrimaLuna is another company that has earned a much deserved reputation for high quality tube electronics at fair prices. Nice room, and a lot of gear on display.