Marco Manunta has been making quite big steps the last few years in the digital domain. His hiFace USB Spdif converter has been sold in big numbers worldwide and soon after that first product, he came up with dac’s, a dedicated external clock, battery supplies and more. Check it out on www.m2tech.biz.

Recently he explained the features of his miracle Joplin AD converter with a rhyme and a video. Now he comes up with a White Paper on the company’s Vaughan. Please have a read!

The Vaughan 384/32 DAC is an innovative product with many distinctive features which are worth to be explored in detail.

To say that the Vaughan is a no-compromise design would be unfair. A real no-compromise design would necessarily be ridiculously expensive and would imply certain features which not always meet the user’s expectations, all in sake of the “absolute sound”. No, the Vaughan is a design in which the most important aspects (with regards to the sound) have been addressed with a reasonable amount of effort and budget share. They are: the integrity of the processing chain, the quality of the supplies, the quality of timings with regards to the jitter and the interfacing capabilities. Of course, an expensive product must also give users the versatility and ease of use they expect for the price. We’ll see in the text which follows as various choices impacted on the important aspects listed above, as well as fulfilling the owners’ expectations.

Even if it is nice to think of a DAC as a digital cable directly connected from its input to the sigma-delta modulators of the conversion IC, things are rather different. Converting a digital signal into its analog counterpart means transferring the digital data from the source (be it a computer, a disc or a network interface) to the DAC, processing it in terms of volume, bandwidth, noise shaping, etc., then increasing its original sampling frequency to a much higher one (by either asynchronous sampling rate conversion or oversampling) to drive the output sigma-delta modulators which produce the analog output current to feed the I-V converter prior the analog buffer/low pass filter.

Every computation increases the need for bits to represent the various results without losing resolution. Using a word length less than the necessary results in truncation of the data, which in turn results in distortion.

Truncation effects are magnified by successive processing and truncations. It’s advisable to avoid any truncation prior the final data delivery to the modulators. This is what we do in the Vaughan: the 32-bit input signal (either filled with 24-bit data from S/PDIF inputs or with 32-bit data from USB and I2S) is sent to a processing core which is responsible for volume control and oversampling. This processing core uses all the bits which are necessary to carry out all computations without truncations in between. The output of the processing core is ready to be delivered to the output modulators, which work with 32 bits. The distortion increase due to this final truncation is well buried below the thermal noise floor of the modulators, so it’s not audible.

The volume control is worth a specific comment. Many so-called experts claim that post-dithering noise shaping must be used to avoid the signal-to-noise reduction implied in volume control. But they refer to the past, when 16 bits was the bit depth available and reducing the listening level by a mere 18db meant losing 3 bits of resolution. Today, we operate with a system in which the ENOB (equivalent number of bits) due to the thermal noise is 21 bits, while the available bit depth at the modulators is 32 bits. This means that it is possible to attenuate the signal down to -68dB before suffering any distortion due to the truncation. Not only: when listening to a 24-bits signal, no resolution is lost down to -50dB attenuation. The volume control in the Vaughan doesn’t use any dithering nor noise shaping, simply because it’s not necessary: at -50dB attenuation, the resolution is still higher than that allowed by most phono stages.

The Vaughan performs oversampling to increase the input signal’s sampling frequency to the value to which the output modulators operate. This value can be 705.6kHz or 768kHz depending on the input sampling frequency. Oversampling is a processing that, provided the sufficient bit-depth is available, doesn’t adversely affect the sound quality.

On the contrary, asynchronous sampling rate is a process which, depending on how it is carried out, can potentially affect the sound. Particularly, any method which uses polynomial interpolation or spline curves should be considered with suspect.

It’s known that using two or more converters in parallel increases the signal-to-noise ratio. The general rule is that each converters doubling increases the signal-to-noise ratio by 3dB. But using more than one converter also gives the designer more options to operate on the signal without adversely affecting it. We use 4 conversion IC’s per channel in mono mode (that is, a total of 8 conversion cores are used per channel). Each IC is driven with the same signal, with a special trick: arrival times of the samples are not the same for all IC’s, they’re separated by ¼ sampling period. This means that the resulting signal from the sum of the 4 outputs of the IC’s in one channel doesn’t change abruptly from one sample to the following, rather it smoothly turns from the actual value to the next one, resulting in a reduced aliasing and out-of-band noise. This is the same result obtained by the anti-alias filter implemented in the output buffer using resistors and capacitors. But this way, we obtain the result without using any capacitors, simply by basic mathematics applied from the digital side of the converters but working on their analog side: no dielectric hysteresis, no tolerances, no blurring.

Jitter is major detriment cause for digital audio. For this reason, it must be kept as low as possible. The Vaughan uses two high quality TCXO’s (Temperature Compensated Crystal Oscillators) with very high precision and very low phase noise (phase noise means jitter). To exploit their full potential, they are powered by a dedicated ultra-low noise regulator in order to avoid injecting jitter by the supply noise.

We know that some competitors use oven-compensated oscillators or even rubidium oscillators as clock sources. We think this is a waste of money, marketing hype: as soon as this ultra-stable clock enters a logic cell (buffer, logic gate, FPGA), it is blurred by the noise from the supply of that cell, with a jitter increase. So, unless we use ultra-low noise supplies for each IC which uses the clock and keep the circuit temperature very low to reduce thermal noise, there’s no sense in spending all those money for an ultra-stable clock.

Moreover, people should not confuse phase noise with stability. While the former affects the jitter, the latter only affect the long term pitch of note, which is absolutely no concern for listeners.

Making a very high resolution digital processing chain and conversion machine would be useless if the analog circuitry was too noisy and distorting to reveal the upstream quality. For this reason, the Vaughan uses special opamps which were designed to process the delicate signal to be sent to ADC’s. They are very low distortion, very low noise design using class-a biasing for the output stage (while almost all opamps are heavily driven into B class and rely on the feedback to linearize their behaviour with low-level signals).

Also passive components are important. We chose to use low-inductance, high-power MELF resistors in order to minimize their effect on the sound, as well as Wima polypropylene capacitors.

Even so, all our effort would be wasted if the power supplies were noisy. The Vaughan uses two regulation stages per each supply rail, with intermediate filtering and ultra-low noise linear regulators as second stage.

The Vaughan is able to operate up to 384kHz. Alas, the S/PDIF standard (as well as the pro companion AES/EBU) only allows for 192kHz operation. To overcome this limit and give users access to the full potential of its performance, the Vaughan is provided with two inputs per type: two S/PDIF on RCA, two AES/EBU on XLR, and so on. They can be configured in two ways: as two separate normal stereo inputs or as a single dual-mono input, in a mode widely used in professional products called dual-AES. Even if we don’t know about digital sources able to convey 384kHz music on dual-AES connections, we know of some consumer products, like the dCS disc player, which are only able to deliver 192kHz on a dual-mono connection.

Further to that, the Vaughan is provided with an I2S input and an asynchronous USB 2.0 port which are both able to accept data up to 384kHz-32bits (we must remember that S/PDIF only allows for 24 bits to be transferred). 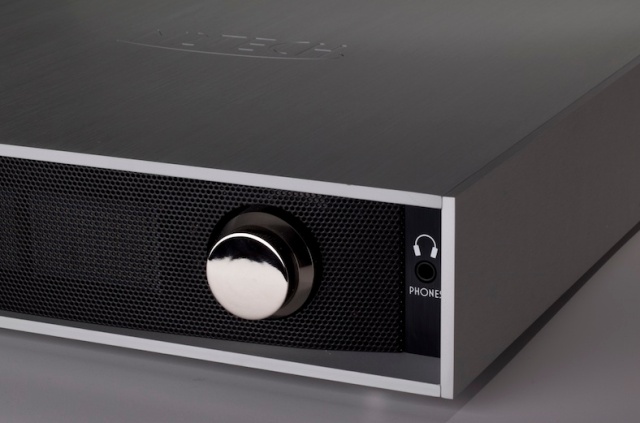 Sometimes is useful to sync the Vaughan to an external clock source. This is possible by sending the clock signal to the dedicated clock input. The Vaughan has a very special clock input: in fact, it can accept both word clocks (same frequency as the music’s sampling frequency) and master clocks (22.5792MHz or 24.576MHz). The Vaughan automatically recognizes the kind of clock being sent to its input: a master clock is directly routed to the processing chain, while a word clock is sent to a PLL to be multiplied, obtaining an internal master clock. This is necessary as the DAC IC’s don’t work at the same sampling frequency as the incoming music signal: the always operate at 705.6kHz or 768kHz, depending on the sampling frequency.

The Vaughan is provided with both single-ended and balanced analog outputs in order to increase its versatility. Balanced outputs are true differential, as they originate from the balanced signal out of the DAC ICs, they’re not produced with a balanced driver or similar. Moreover, a headphones amplifier is included in the package, with a 6.35mm jack socket on the front panel. The amplifier is a bit of a small power amp, with complementary power transistors. It is able to deliver high currents on low-Z headphones with a voltage swing sufficient for even the least sensitive unit. Its 10 Ohms output impedance suits both low-Z and high-Z headphones.

The Vaughan as a preamplifier

Sometimes, it’s desirable to keep the signal chain as short as possible to keep the highest sound quality. With the Vaughan, it is possible to set up a hi-fi system with just a computer or a CD transport, a power amplifier and a pair of speakers. In fact, the Vaughan is provided with a digital volume control, a balance control, as well as mute and phase reversal features. A voltage level of 2.7Vrms on single-ended outputs and 5.4Vrms on balanced outputs allow for driving virtually all power amplifiers around. A nice remote control gives users access to all Vaughan’s features from the armchair. The large led matrix display allows all users to clearly read the unit’s status or control’s effects.