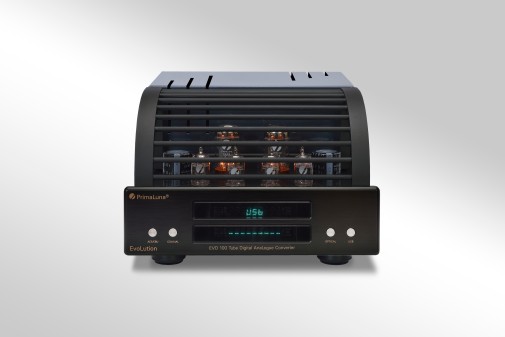 The team of Upscale Audio in the U.S.A. received a very nice review from Jack McCready about his PrimaLuna EVO 100 Tube DAC

I’ve always preferred analog for its relaxing and involving sound. CDs in contrast often sounded bright and flat to me. I splurged on a Bryston BCD3 a few years ago. It’s a high quality, nice sounding, well-built player. Reviews called it “analog sounding”. Not really IMO. Not bad, but analog still smoked it. So I read several amazing reviews of the PL DAC 100, and knowing what the PL HP integrated did for music, I gave it a go from the ever-helpful staff at UA. Really, there was nothing to lose with a 60 day trial. So on to the sound… Components and cables take time to “settle in”. Still, from the second the DAC was inserted everything opened up. There was more “there there”. More depth, clarity, dynamics, and richness which led to more engagement with music. Still. I thought it sounded more like digital on steroids than analog. I’ve had it for several weeks now and decided to directly compare CD to LP, using the Acoustic Sounds Female Vocals (highly recommended) hybrid SACD and LP. I expected analog to win as I have about the same money in LP and CD playback. BUT NO! My wife picked up the differences immediately…more depth, warmth, dynamics and resolution. Better separation of instruments. I’d perhaps give a slight nod to analog being more relaxing, but the CD was more immersive. I’m happily surprised.

Learn more on the website of Upscale Audio: www.upscaleaudio.com

Watch also the video from Kevin Deal about our PrimaLuna EVO 100 Tube DAC.

Through the link below you can see our PrimaLuna distribution network.